The Tower, The Zoo, and the Tortoise 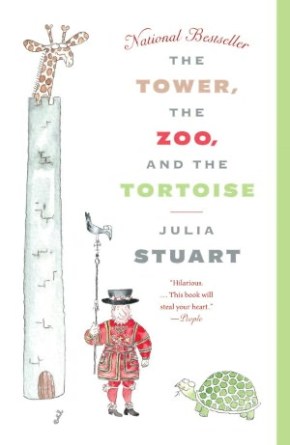 Like a wisp of a dream, or the apparition of a long lost lover incendiary before your eyes, this book is exquisite and before you know it, it’s gone.  Ms. Stuart brings a robust cadre of characters alive into their full-fledged, quirky selves with such magnanimity that you might as well be sitting across the sofa from them, drinking their Earl Grey tea and laughing with them about the escape of the penguins from the Tower Zoo.

The story centers on Balthazar Jones, a royal London Beefeater, and his diminutive Greek wife, Hebe Jones; their 181 year old pet tortoise, and the chasm where their once eleven year old son was.  Balthazar caries out his duties of royal tour guide for the tower of London, where such queries as, “who was beheaded in the Salt Tower?” and “where’s the loo?” eventually reduce his mental status to crumbs. But just before the tourists goad him to death, Balthazar becomes keeper of the Royal Menagerie, which moves to the Tower of London to house the Queen’s feathered and furry gifts from Heads of State. The importance of the post brings Balthazar a sobering challenge in the midst of his midlife existentialism.

Hebe Jones, on the other hand, spends her time at the London Underground Lost Property office, returning such things as tomato plants, canoe paddles and urns to their rightful owners.  She consorts with Valerie, her co-worker and co-conspirator of 15 years, about what to do with lost blow up dolls and lost urns and wayward ticket takers.  Also up to various amounts of mischief are Reverend Salazar, who moonlights as a romance novelist; Ruby Dore, the buxom barmaid and keeper of many mysteries, and the Ravenmaster, a skulking figure bent on keeping his precious ravens safe from the likes of 181 year old tortoises.

In this magical tale of Beefeaters who collect rain and tend to royal zoos, lies a swift current of love and loss, and the power of two people to overcome the black hole of losing a child.  Sublimation, in book form.